Walk-in-Interview for JRF in Physics Department Under SERB Project 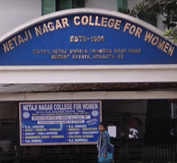 Netaji Nagar College For Women came into being as a culmination of the efforts of the people of the region. The people who settled. here at Netaji Nagar had to struggle a great deal for their existence. They soon realized that knowledge and education are the only weapons in their possession. Thus their sentiments and desire for quality education for their children led to the establishmet of Netaji Nagar College on 25th September, 1967, with the active support of Late Prasanta Kumar Sur, Ex-President of the college and Ex-Minister of the Govt. of West Bengal, Late Snehangshu Kanta Acharya, Ex-advocate General, Govt. of West Bengal, along with the whole-hearted support of the-then Vice-chancellor of Calcutta University, Late Bidhubhusan Malik.
The trifurcation of the erstwhile college became inevitable due to the ever increasing demand for the education of the girl students of the locality in a conducive academic atmosphere. Thus on 1st April, 1986 was born Netaji Nagar College For Women.

It is great pleasure for us to announce that our College has been accredited by the National Assessment and Accreditation Council (NAAC) of the University Grants Commission.
The NAAC Peer Team has noted with appreciation the following healthy practices adopted by the College, which has influenced and improved the quality of its academic activities.
In partial fulfilment of its goals and objectives the College has produced a large number of educated women through quality teaching. The system of collecting feedback from students on different aspects of the College like academic, administrative, campus environment etc. is useful as this can be used as input for planning future development of the Institution. University Registration receipt, if any Students' representation in the Governing Body ensures their involvement and participation in the functioning of the College.
Imbibing community orientation and social responsibility among students through extension activities and outreach programmes. Adopting rotational headship in each department.

Message from the Principal